The Warrior's Lament or With Arms Outstretched Wide 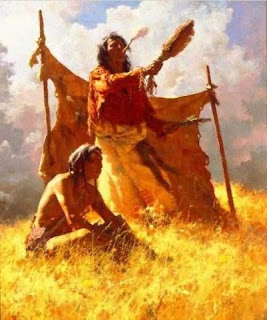 A few years ago I participated in a 7 day personal vision quest with a group of about 10 people. Three full days and nights of the quest were solo and fasting in the wilderness.The pre and post days were spent in preparation and follow-up with the group in the wilderness as well. I experienced some major personal revelations/visitations during that solo time on the mountain, and my learning and own awareness continues to unfold as time keeps on slipping into the future from those mountaintop moments. A few months back I met with my good friend and facilitator of the visionquest journey--who was interviewing me for his dissertation—a piece on the vision quest experience. I was really curious to hear his observations and asked if i could read it when he was done--so i just got it and read it and here is what came of that...
It’s so funny how shocked I always am by an outsider’s perspective on my own inner journey. I have had several moments sitting on the therapist's couch when I have learned some really surprising bits about myself
and have felt none too settled as I digested the curious information.
This is how I felt as I read his paper—shocked, surprised, even troubled by the summation he had come to on my personal learning from the journey. Is this really what came across as the most important piece of information I had shared? Could he have possibly been not really listening to what I had to say? Is it possible that he came into the interview with so many preconceived notions that he only heard what he wanted to? Well all of this is possible and actually even probable—I’m of the opinion we typically only hear what we want, and only as it relates to us most of the time. However with all those disclaimers being made, I also came to another conclusion that was quite surprising to me...
I had learned something much bigger, more powerful and poignant than any of the conclusions he came to about what I shared, but he could only base his observations on what I told him; He wasn’t up there on the mountain with me; He didn’t stand on the edge of that cliff with me, chest bared, long hair whipping in the wind as I wailed out my own personal lament, crying to the ancestors that surrounded me to ‘come running’ as if from Rumi’s stretcher of angels;

How could he have known any of these things...
because I didn’t tell him?
Not only didn’t I tell him, I considered the knowledge, the personal revelation, the intimate experience to be in fact so intimate that I could only reveal it in the verymost intense and
deeply in touch of moments that few on this plane would ever know it.
So why when I read his observations was I so offended that he hadn’t read it in my essence
as if from the ethers?  Oh the personal indignation, nostrils flaring, quippy dismissal—I moved effortlessly into fullblown denunciation without much provocation(all with at least a small maintained sense of humor about the whole thing)  that I had to let go even that fact that I had read his paper at all for a period of time.   As I caught my breath, let a few weeks pass, reread the paper a few times—most importantly reviewed, expressed, defined and embraced the big lessons that sit so profoundly on my heart from this experience, I realized that I had fully protected, guarded and strong-armed any intrusion into that space, even from the most well-meaning of inquiries.
And here it is… How else is it possible that others come to know those places in me, other than if I choose to share them?  I am the keyholder and gatekeeper—wow, I get all the power.  But what’s that guardianship worth if there isn’t anyone to share it with?  Realizing all this, I look at some of his observations and the pendulum swings back…maybe he wasn’t entirely off the mark, maybe he was able to come to some conclusions about what I had told him that really did have something to do with what was going on for me…and then a little more breath, allowing, okayness sneaks in.   and so we are both right…there is more to share and more to learn…and just like that,
now the way is made open.